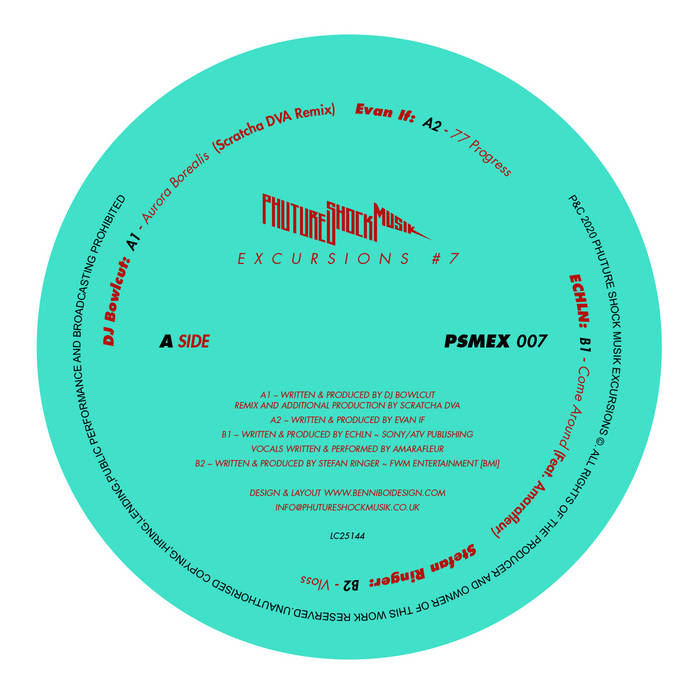 As Bristol’s Phuture Shock Musik strides into its landmark tenth year in action and the next chapter of its journey, the sister arm of the label casts the net a little wider in both a geographic sense and genre wise for its latest vinyl-only compilation release -‘EXCURSIONS # 7’. Rallying up a dynamic
force of global talent from as far and wide as South Korea to South Africa through to Europe and the United States, this instalment orbits a sonic dimension where modern, left-leaning strains of house, broken beat and future soul freely collide together across four exclusive cuts.

Joining the ride once again, although in remixed form, is Seoul’s foreman of leftfield house and techno, DJ Bowlcut. Here the controls are handed over to veteran UK bass experimentalist and Hyperdub mainstay Scratcha DVA aka Scratchclart, who flips the original track – lifted from ‘EXCURSIONS # 5’ – inside out and squarely on its head, with riotous, gqom-inspired results. Some new blood is introduced in the shape of electronic musician Evan If, here making his debut appearance on wax. Hailing from Seattle, though now based in Barcelona and very much a part the city’s experimental music scene, the synth devotee has a few prior self-releases to his name, and has also previously collaborated on material with fellow Barcelona resident and PSM regular Karmasound; under the moniker Evan & Damián.

Also making a debut entry on Phuture Shock and
the vinyl format is rising electronic soul producer ECHLN, coming straight out of Cape Town. Assisted by emerging singer-songwriter Amarafleur on vocal duties, the South African’s offering affirms his knack for collaboration with the cream of Mzansi soul and R&B talent. In recent years his futuristic productions have surfaced on Singapore’s Darker Than Wax imprint and Johannesburg label Stay True Sounds, among others. Representing stateside and completing the unique quartet is Atlanta’s very own Stefan Ringer. A key player of the A-Town’s burgeoning dance underground, over the last
decade the producer and DJ – initially known as REKchampa - has released a trail of heat via the likes of Kai Alcé’s NDATL, Black Catalogue, PPU, plus his own FWM imprint. And here remains on form with a dancefloor-ready contribution to round off the disc.

Bandcamp Daily  your guide to the world of Bandcamp

Featuring appearances from Kari Faux, Bluestaeb and and interview with NY-bred artist Wiki